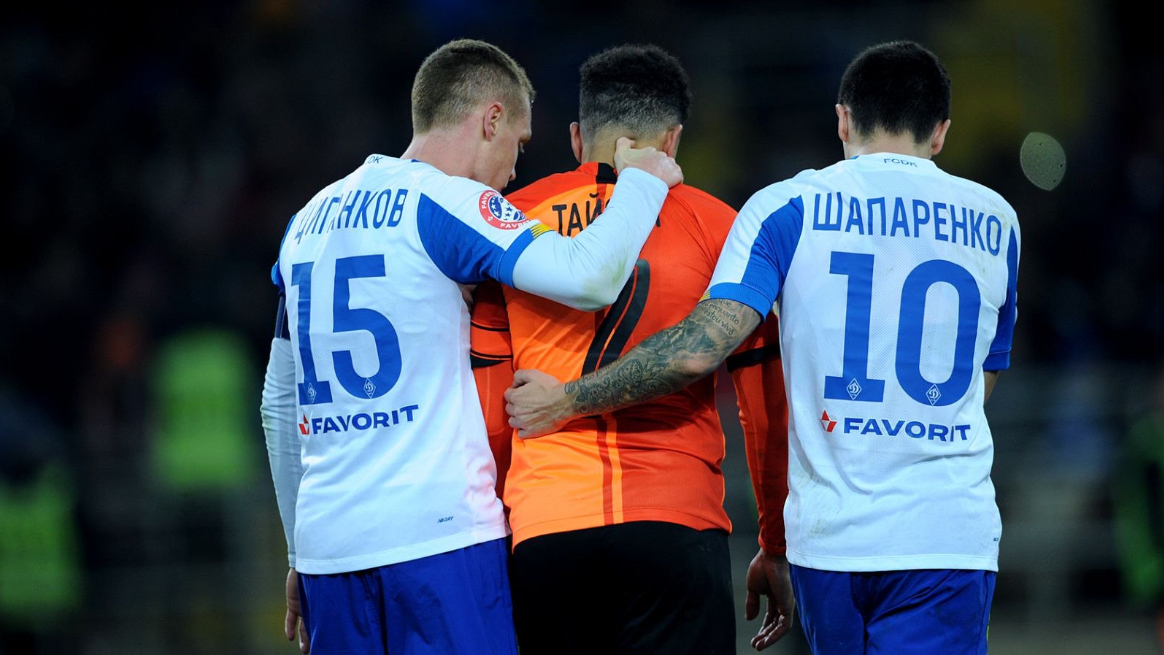 Shakhtar Donetsk captain Taison was sent off for reacting to racist abuse from Dynamo Kiev fans by sticking his middle finger up in Sunday’s 1-0 Klasychne derby win.

Brazil international Taison led a counter-attack in the 74th minute and the move came to an end when he tripped Dynamo defender Artem Shabanov.

From that corner of the stadium, Dynamo fans directed racist chants at the forward, to which he responded by kicking the ball into the stands and making a hand gesture.

While players from both sides urged those responsible to halt the abuse, referee Mykola Balakin led the teams off the pitch as per UEFA protocol, with Taison and Brazilian compatriot Dentinho in tears.

A message was read out over the public address system and the teams returned to the pitch in the 80th minute, as three Dynamo players again went over to discuss the situation with their supporters.

But before play resumed Balakin called Taison over and showed him a red card, with the former Metalist star – who has played in Ukraine for nearly a decade – looking perplexed.

Shakhtar coach Luis Castro did not conduct a post-match media conference as usual after the contest, instead releasing a statement slamming the Dynamo fans’ actions.

“Today, my players have once again shown their character,” the statement posted on Shakhtar’s official website read. “They were showing the character throughout the game.

“At this moment, I want to support absolutely everyone suffering from racism and the guys who have suffered today.

“Any manifestations of racism are absolutely unacceptable. It was, is, and will be a disgrace to everyone. Together, we must fight it – every day, every minute, and every second.”

“Shakhtar categorically opposes any manifestations and forms of racism, racial discrimination, xenophobia, and any related intolerance,” they said.

“There can be no justification of those who insult other people because of their skin colour, religious, or political beliefs.

“This kind of behaviour is unacceptable in any civilised countries and football leagues. UEFA imposes the toughest sanctions on the clubs and associations for their fans’ racist behaviour in matches.

“Such humiliating incidents cause pain and disappointment to the large football family of FC Shakhtar.

“We condemn this kind of behaviour of the crowd. We will always voice support for and protect our players. We are calling on football authorities and clubs to stop racism in stadiums.”

August 12, 2019
After injury scuppered a swoop for Manchester City star Leroy Sane, the Bundesliga champions appear to be closing in on
Soccer

September 14, 2019
The anti-graft body has taken a step in its on-going investigation of corruption in the Nigerian football body The Independent
Soccer

October 12, 2019
The Atletico de Luanda striker is listed in the Amavubi squad which will take on Taifa Stars in an international