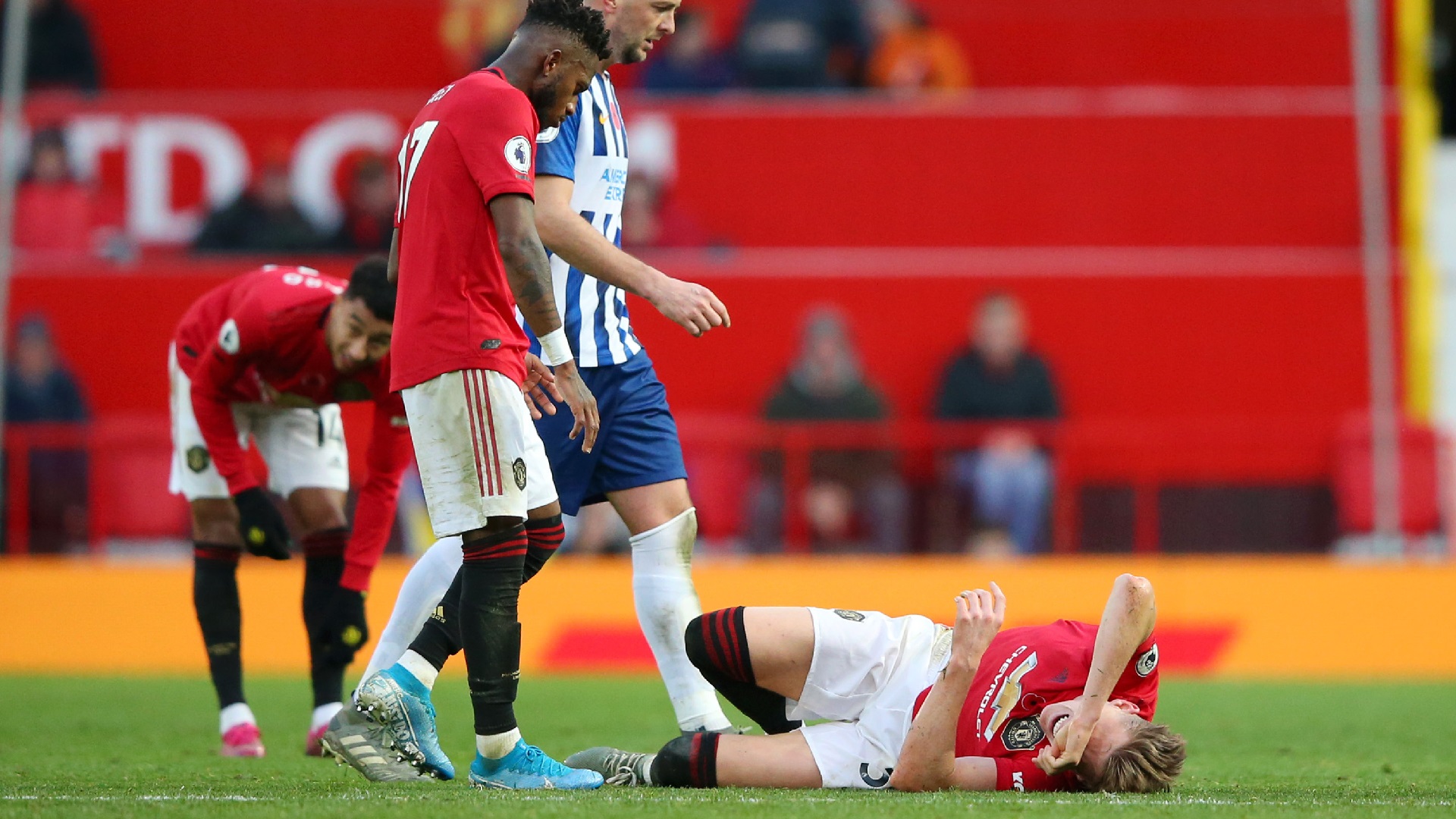 The Scotland international midfielder was helped from the pitch deep into injury time at Old Trafford, and looked to be in real pain

Manchester United’s 3-1 win at home to Brighton on Sunday afternoon was marred by an injury late in the game to the increasingly influential midfielder Scott McTominay.

The 22-year-old Scotland international had earlier forced an own goal from Brighton’s Davy Propper to put United 2-0 up, with goals from Andreas Pereira and Marcus Rashford eventually helping United up to seventh in the table.

McTominay looked to be in considerable pain as he was helped from the pitch deep into stoppage time, though a stretcher which had been readied for him wasn’t used.

With United having used all of their substitutions, they saw out the final seconds of the game with ten men.

McTominay has played in all but two of United’s games in all competitions so far this season, and has two goals to his name following strikes against Arsenal and Norwich.

However, with the Premier League season now interrupted by the international break, United will be hoping the two-week break to their next fixture will be enough for McTominay to recover if the injury turns out not to be serious.

Paul Pogba is expected to return for United after the international break after being out since September with an ankle injury.

United face Sheffield United on November 24, and will look to leapfrog Chris Wilder’s impressive Blades side who sit one point and two places above them in fifth.

Ole Gunnar Solskjaer’s side will then face Astana in the Europa League, before home league games against Aston Villa and Tottenham precede the first Manchester derby of the season at the Etihad in early December.

Any injury will also be bad news for Scotland manager Steve Clarke, whose side have two winnable fixtures coming up in Euro 2020 qualifying.

Scotland travel to Cyprus before returning home to face Kazakhstan, though qualification for next summer’s tournament is already out of the question as they trail second-placed Russia by 12 points with two games remaining in Group I.

They squeezed past Cyprus 2-1 back in June, but an embarrassing 3-0 defeat to Kazakhstan in March had already set the tone for what has been another disappointing qualifying campaign.

December 29, 2019
The Belgian shot-stopper insisted there was never any issue between himself and his former Los Blancos team-mate Thibaut Courtois insisted
Soccer

February 14, 2020
Khalid Jamil focussing on next two games after losing to Odisha on Friday... Robert Jarni mutually terminated his contract with