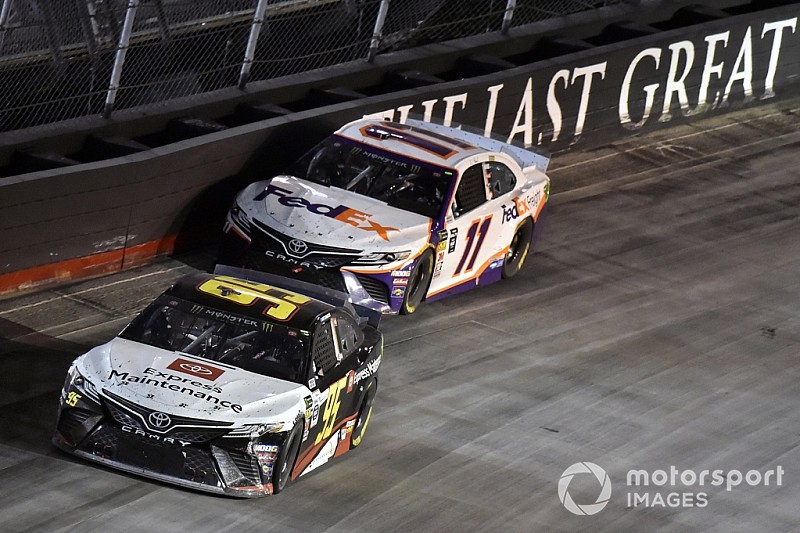 DiBenedetto said his “priority” is to win in the Monster Energy NASCAR Cup Series because he believes that’s the only way he will continue to climb the career ladder in NASCAR.

“The attention and support we got from fans in general, that was unreal,” DiBenedetto said Friday at Road America. “The crowd cheering when I was about to get interviews on the big screen, everybody screaming, the whole place, I was like, ‘Is there a fight going on or something? What’s happening?’

“I didn’t know what was going on. And then I was like, ‘Oh, that’s for us.’ I couldn’t believe it. I could barely get words out. I was shocked.”

DiBenedetto had led 93 of 500 laps in the Bristol race before eventual winner Denny Hamlin passed him for the lead and the win with 11 to go.

In the past two months, DiBenedetto has earned the best finishes of his Cup car driving Leavine Family Racing’s No. 95 Toyota.

He was notified before the Bristol race he would not be returning to LFR next season but he won’t let that detract from his objective over the final 12 Cup races of the year – earning a win (or more).

“It wasn’t a fluke that we ran up front at Bristol all weekend and we’re fast. It was a lot of change for the team over the off-season and a lot of new people and changing manufacturers and at the beginning of the year, it was a lot of work for the team,” DiBenedetto said.

“We were probably behind or just getting the cars to the tracks and trying to play catch-up a lot and (crew chief Mike Wheeler) working to implement his process and get in the flow of everything in the shop how he wanted it.

“It took time. And now you’re seeing where all that stuff is implemented and it’s just a smooth process.”

While disappointment set in after coming up short on his first Cup win at Bristol, he was quickly reminded that he would be competing in this weekend’s Xfinity Series race at Road America for Joe Gibbs Racing.

This one would be fun. When I got the phone call I was jumping up and down, I was so excited,” he said. “Any opportunity to go try to win is good. That’s good for your career and for the team and for Toyota, for everybody.

Right now, DiBenedetto said he has no new opportunities that have been presented for next season.

Asked if the 2020 season will be “Cup or nothing” for him, DiBenedetto said, “I don’t know. I think so. I just feel that way. I can’t see the future right now. I hope it doesn’t sound naïve but every time a door has closed and I’ve been absolutely devastated, every time in my whole life going back to a kid, it’s always opened a better door.

What the new Cup Series sponsorship model means for NASCAR

December 7, 2019
After more than a year of work, NASCAR unveiled its new sponsor model for its Cup Series this week, highlighted
Auto/Moto Nascar

November 3, 2019
In sharp contrast to Stage 1 which featured six cautions, Almirola grabbed the lead in Stage 2, survived a round