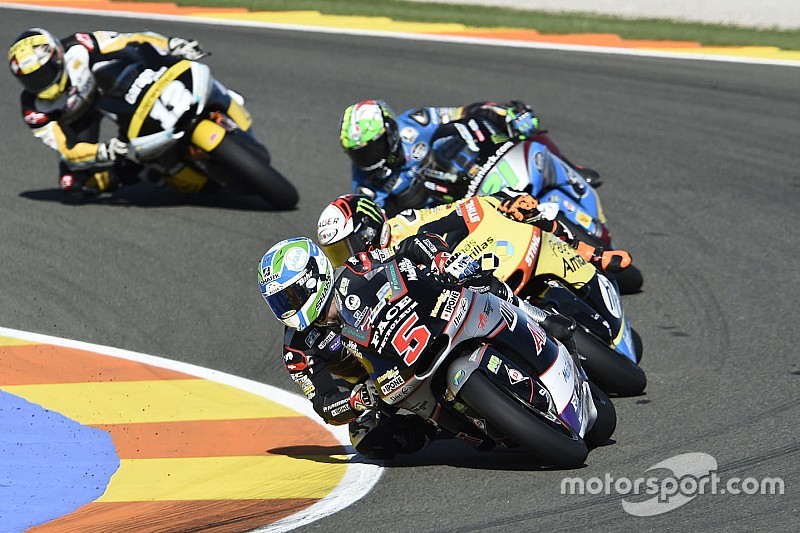 KTM sensationally announced on Monday following its home race at the Austrian Grand Prix that Zarco would be leaving the team at the end of this season, having personally requested to terminate his two-year contract early amidst a difficult campaign aboard the RC16.

Zarco’s options to remain in MotoGP are limited, with all other seats barring Takaaki Nakagami’s at LCR secured.

Nakagami and Honda have reached a stalemate in talks over supplying him a works bike for next year, but the Idemitsu-backed side of the LCR garage is built around a Japanese rider – making it an unlikely destination for Zarco regardless.

Speaking to RMC in France, Zarco concedes returning to Moto2 – where he was twice a champion in ’15 and ’16 – is a serious option with space on the premier class grid limited.

When asked if being MotoGP champion was still his target, he said: “Completely. That’s the target and target for 2020 is to race in MotoGP, to be on a good level MotoGP [package].

“Not to find a new level of riding, because it’s still there – it’s not been lost in eight months, but to put me [back] in the intensity of the front positions and then to have the opportunity to fight for the championship.

“It [Moto2] is an option. There is, let’s say, a plan A, B, C, maybe even D. Everything is still very fresh, the announcement was made on Monday.”

Zarco says he now has a “feeling of peace” within himself since the announcement, and is adamant he bears no ill feelings towards KTM – while also admitting other riders have proven it’s not impossible to make the RC16 work.

Expanding on why he made the decision to leave, he added: “I think it will be a soothed relationship [with KTM to the end of the year], because I told them I have nothing against them, nothing at all.

“It’s simply I don’t accept being relegated almost to the last positions while I can do better.

“Simply, this desire to be in the front ranks burns deep inside me, and as long as I am in this rhythm, with the motivation to go to the front, I give my all to not [simply] try to bounce back at the end of 2020 and prepare for 2021 – but to bounce back already in 2020.”

Zarco was linked to a ride in World Superbikes with Honda for next season earlier in the year, but he rubbished those claims as “bullshit” and did not elude to such a move being an option this week.

Russell says Italy will be toughest race for Williams

September 19, 2019
Having won the last two rounds at Spa and Monza, which are both typically high-speed circuits, the low-speed frailties of